Rougarou is Cedar Point's Floorless Roller Coaster. The roller coaster was built in 1996 as Mantis. Mantis was a Stand Up Roller Coaster that closed in 2014. For the 2015 season, Mantis was converted into the Floorless style Rougarou.
In 2006 Skyhawk opened as the world's tallest swing ride. Riders would twist and turn thru canyons on Maverick in 2007. Kids ruled the planet in 2008 when Planet Snoopy opened. In 2010 Shoot The Rapids opened on the Frontier Trail as Cedar Point's tallest water ride. WindSeeker took riders 301 feet in the air in 2011. In January 2012, long time Cedar Fair CEO Dick Kinzel retired. The new CEO would be Matt Oumitt. Under Mantt's Leadership Cedar Fair would take a different direction. Dinosaurs Alive on Adventure Island opened in 2012. In 2013 riders would fly over the parks new front gate on GateKeeper. In 2014 Gemini Midway was remolded.
With all these new additions, 2015 would bring something unique to Cedar Point. 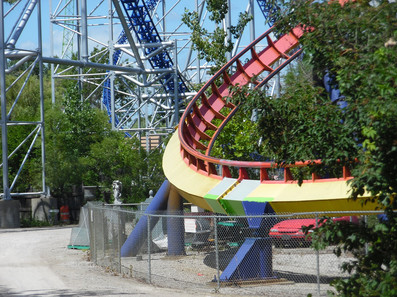 During the summer of 2014 an interesting change was noticed to Mantis. A small section of the track was painted green. When this was noticed, rumors swirled in the Coaster Community.
Rumors ranged from this being a spot of test paint to this being a new welding job of some kind.

The ride was being marketed as a new experience and it gave something the park didn't have before. Over the years many Floorless Roller Coasters had been built. The first Floorless Coaster opened in 1999 at Six Flags Great Adventure.
The ride began its conversion to Rougarou in early September 2014. The transformation began with the ride being painted. Fall 2014 was a good time to paint because it was so warm. The entire ride had been painted by the end of October.
Cedar Point closed Mantis on October 19, 2014 to allow enough to for the ride to be transformed.
During the winter the ride received a new dropping floor. The station was modified to fit the new floor. The ride also got a new safety system, control system as well as a new breaking system. All this was required to make room for the new trains.
Construction crews worked hard to make sure the ride would be ready for when the park opened.
Rougarou was designed by Ing.-Büro Stengel GmbH. Rougarou  was built by Bolliger & Mabillard. Over the years the company would build: Raptor (1994) Mantis (1996-2014), GateKeeper (2013), Rougarou (2015), and Valravn (2016). These coaster types have often been some of the most popular rides in any amusement park.
The conversion made the ride much better. It was more conferrable as a floorless coaster and the ride was more re-rideable.

The average wait time for Roguarou is 10-15 minutes. The longest wait time can be up to 1 hour.
The floor is dropped from below the riders and the journey begins.
Rougarou gives a great view on the way up the hill. It takes 45 second for the train to get to the top of the ride.
Rougarou then drops 137 feet at a 52 degree angle!
Rougarou is a very high energy roller coaster that is a very exciting ride from the start all the way to the finish!
The rest of the ride is taken at a fairly fast pace.
Riders arive to the station where they exit the ride. The exit leades to the ride's photo booth.
Rougarou was a very good addition to Cedar Point. After Rougarou, Cedar Point would add: Valravn (2016), Cedar Point Shores Waterpark (2017), Steel Vengeance (2018), Forbidden Frontier on Adventure Island (2019), and Cedar Point's 150th Anniversary Celebration (2021). All of these new actions have helped make Cedar Point a better place.
Photos by: Jake Hamons, COASTER-net, and Cedar Point.
Last Updated: 5/20/2020